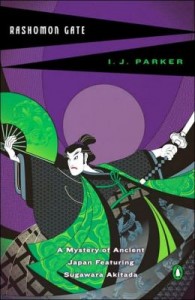 The Sugawara Akitada series is another historical crime series set in the Heian period of Japan where the court was first starting to establish a more recognisable Japanese flavour still clinging to the Xian Confucian style teachings and cultural norms.

The Heian period is probably best known for the classic novel Genji Monogatari and the Sugawara books call to mind this form of hushed regularity and beauracracy. Unlike many other series of this kind there is no happy ending; character fall sick and die in battle, people grieve and have psychological trauma. This is a real human story of castes, professions and being frustrated with what seems to be ill fortune and an unfair lot.

Though missing the lavish hedonism of the Edo period this series is nonetheless a wonderful historical peek into Japan’s history and establishes many of the rules that would later define the class system that would allow the geisha world to appear.