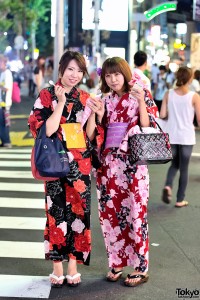 A yukata (浴衣?) is a Japanese garment, a casual summer kimono usually made of cotton or synthetic fabric, and unlined. Yukata are worn by men and women. Like other forms of traditional Japanese clothing, yukata are made with straight seams and wide sleeves. Men’s yukata are distinguished by the shorter sleeve extension of approximately 10 cm from the armpit seam, compared to the longer 20 cm sleeve extension in women’s yukata. A standard yukata ensemble consists of a cotton undergarment (juban), yukata, obi, bare feet, sandals (geta), a foldable or fixed hand fan, and a carry bag (kinchaku). Yukata literally means bath(ing) clothes, although their use is not limited to after-bath wear. Yukata are a common sight in Japan during the hot summer months. 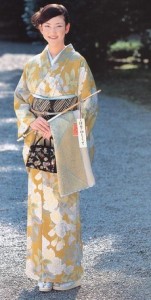 (小紋): “fine pattern”. Kimono with a small, repeated pattern throughout the garment. This style is more casual and may be worn around town, or dressed up with a formal obi for a restaurant. Both married and unmarried women may wear komon. 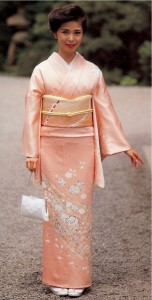 (付け下げ): has more modest patterns that cover a smaller area—mainly below the waist—than the more formal hōmongi. They may also be worn by married women.The differences from homongi is the size of the pattern, seam connection, and not same clothes at inside and outside at “hakke.” As demitoilet, not used in important occasion, but light patterned homongi is more highly rated than classic patterned tsukesage. General tsukesage is often used for parties, not ceremonies. 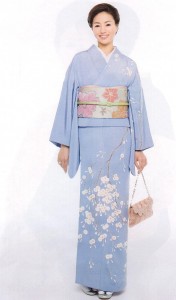 (訪問着): literally translates as visiting wear. Characterized by patterns that flow over the shoulders, seams and sleeves, hōmongi rank slightly higher than their close relative, the tsukesage. Hōmongi may be worn by both married and unmarried women; often friends of the bride will wear hōmongi at weddings (except relatives) and receptions. They may also be worn to formal parties.

(振袖): furisode literally translates as swinging sleeves—the sleeves of furisode average between 39 and 42 inches (110 cm) in length. Furisode are the most formal kimono for unmarried women, with colorful patterns that cover the entire garment. They are usually worn at coming-of-age ceremonies (seijin shiki) and by unmarried female relatives of the bride at weddings and wedding receptions.

(色留袖): single-color kimono, patterned only below the waistline. Irotomesode with five family crests are the same as formal as kurotomesode, and are worn by married and unmarried women, usually close relatives of the bride and groom at weddings and a medal ceremony at the royal court. An irotomesode may have three or one kamon. Those use as a semi-formal kimono at a party and conferment.Kurotomesode

(黒留袖): a black kimono patterned only below the waistline, kurotomesode are the most formal kimono for married women. They are often worn by the mothers of the bride and groom at weddings. Kurotomesode usually have five kamon printed on the sleeves, chest and back of the kimono.

(色無地): single-colored kimono that may be worn by married and unmarried women. They are mainly worn to tea ceremonies. The dyed silk may be figured (rinzu, similar to jacquard), but has no differently colored patterns. It comes from the word “muji” which means plain or solid and “iro” which means color. Kuro-muji is a black version of the single colour kimono intended for mourning wear.

Mon-tsuki is a formal kimono with family crests.  It’s worn by men on formal parties or ceremonies, like marriage ceremonies or funerals similar to a suit in Western Dress “Mon” means “family crest”, and “Tsuki” means “putting on”. The fabric is plain / solid, adorned with family crests (1, 3 or 5 increasing in formality)

The susohiki is usually worn by geisha or by stage performers of the traditional Japanese dance. It is quite long, compared to regular kimono, because the skirt is supposed to trail along the floor. Susohiki literally means “trail the skirt”. Where a normal kimono for women is normally 1.5–1.6 m (4.9–5.2 ft) long, a susohiki can be up to 2 m (6.6 ft) long. This is also why geisha and maiko lift their kimono skirt when walking outside, also to show their beautiful underkimono or “nagajuban” (see below).[17]

Odori means dance, so this is a traditional Japanese dancer’s kimono. Katamigawari means half and half, referring to this kimono being half one design and half another, which is more likely to be seen on an odori kimono than any other. Many odori kimonos are tsukesage, houmongi or komon in style. They are often in synthetic textiles, so they can, unlike silk, be washed regularly and they are most frequently unlined or just lower lined, to keep the dancer cooler

The uchikake is the most formal version, often heavily embroidered or hand-painted with patterning that covers the entire garment. There is a thickly padded hem (usually in orange-read) that would seem to drag on the floor.  Uchikake are quite bulky and not meant to be belted like most kimono are; instead it is worn open, draped over another layer of wedding kimono (the kakeshita).  The Uchikake are usually reserved for photo-taking or to be worn during the ceremony only. During a ceremony, the extra length of the uchikake will be taken up at the waist with the bride carrying it with her hand or it might be clipped at the waist, but not belted.

The kakeshita is the wedding kimono that is worn beneath an uchikake.  The patterning would be quite elaborate, asymmetrical, and include auspicious marraige symbols such as pine (for endurance and longevity) or cranes (which mate for life).  Like the uchikake, the kakeshita has a bright orange-red padding at the hem but this padding is much lighter – an inch of padding as compared to 2-3″ of padding on the uchikake.  The patterning of the kakeshita is also typically sparse around the mid-section, as this would be covered with a formal obi belt.  The kakeshita fabric is similar to a furisode kimono, and the sleeves are usually just as long.  Kakeshita can also be pure white (shiro-kakeshite), especially if worn beneath a shiromuku (see below).

“Shiro” means “white”, and this style is always white-on-white (or cream, or eggshell) and rarely has any accent color.  There will be auspicious marriage imagery in the weave. Contemporary versions may have glittery threads woven into the design or perhaps a very thin accent color at the hem or collar. Shiromuku, like uchikake, are also worn without an obi, layered over a white kakeshita and its obi.  White is used to symbolize death, and in the case of a new bride it refers to the ending of her old life and the beginning of her new one as a wife. Other interpretations of the color suggest that the bride is pure as a “blank canvas”, open to adapting to living with her husband’s family.  The shiromuku is often worn with a hood-like head covering called a tsunokakushi, which means “horn covering”, symbolizing that the bride will hide any jealousies she might otherwise have towards her new family

Kimono Under and Outerwear