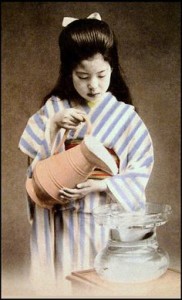 When a girl is young and lives in an okiya she will perform the stage of Shikomi. Today this is usually just the relatives of the okiya proprietress or working geisha, their daughters planning to become geisha themselves, though once young girls sold to okiya would have worked in this stage to start repaying their debt.

Shikomi is a stage of servitude where a young girl works as a maid or servant to the okiya, cleaning, doing errands and so on. According to today’s laws a young girl must also attend school until she is 15. 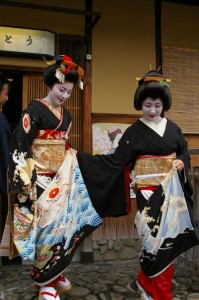 When a girl becomes a maiko she must find an onesan, an older geisha to become her mentor. This geiko may not necessarily be from the same okiya but that is the most common way. The rite of misedashi is a maiko’s debut, and much fanfair is given to the ceremony. Fans and banners bearing the caligraphy and name of the new maiko are given out to loyal patrons and other members of the hanamachi. To bind the maiko to her onesan the ritual of san san kudo is performed, usually in public at the kaburenjo and followed by a party! 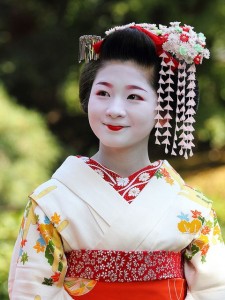 Following her misedashi a maiko is now a public member of the geisha community but has not completed enough training to entertain. It is the responsibility of the onesan to take her to ozashiki, where she will sit quietly and observe the older geisha at work. In this way she may learn the ways of the geisha, become known to potential clients and be seen while she is still training. Throughout this time, and for the rest of her career the maiko will attend classes in her chosen arts at the kaburenjo, though she will cease attending normal high school. 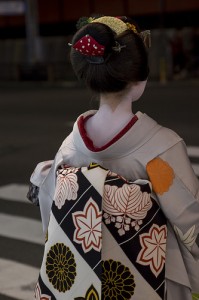 Some time in the course of her apprenticeship the maiko is expected to pass through mizuage. Once this meant that her virginity was sold to a client, though now Japanese prostitution laws forbid this. Mizuage is a private matter and is now the concern of the maiko only (though rumours still abound). It is not something spoken about publicly but the chignon change in the maiko hairstyle is now a sign of maturity rather than virginity and usually occurs when she turns 18. There are 5 hairstyles the maiko must wear that mark the different stages of her apprenticeship more on this is available in the fashion section. 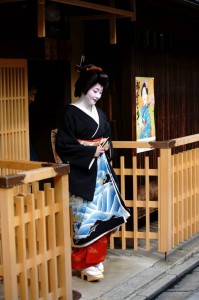 The turning of the collar or graduation from apprentice –  this is the ceremony when a maiko becomes a geiko. At this stage she will change her kimono from furisode to kosode, change her hair to the more adult sakko style and change her collar from red to white. From now she must dress and act more like a woman rather than a girl, and the changing of the collar is indicative of this maturity. 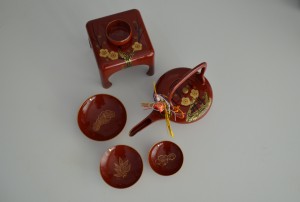 Is the drinking from sake cups, 3 sips from each of 3 cups, shared with one you are being bound to. As well as being performed with an onesan at misedashi san san kudo is performed when a geiko is bound to a danna. This is also the marriage ceremony outside the geisha world. 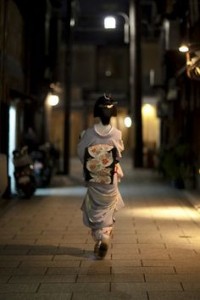 When a geisha retires from public life she has a celebration, the hiki-iwai.

This celebration can mean many things in today’s society, that she has formally retired, quit the geisha life, become too old to work publicly, is getting married or become an okami-san. 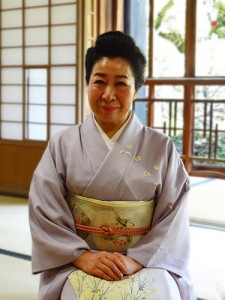 An okami-san is a proprietress of either an ochaya or okiya, this is a common way for retired geisha to live since it is rare for former geisha to get married or raise children and there are few careers open to middle aged women in Japan.