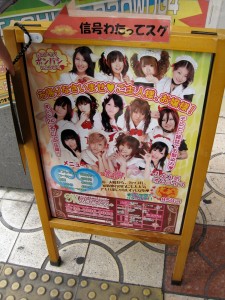 There are those that would turn their noses up to think that the lowly hostesses and cosplay girls have anything to do with Geisha but the reality is that paid companionship is an ongoing tradition in Japan. Gone are the elaborate Tayu, the Geisha reserved for only the wealthy. Today in Japan if you’re looking for entertainment and someone to keep you company then the modern mizu shobai or water trade is there to meet your needs.

Here we will take a peak into the every man’s companionship. Like the courtesans and geisha before them many in the water trade do not perform sexual favours but instead eat, drink and entertain the willing customer.

Originally designed to cater to otaku comic book fans in Akihabara Cosplay cafes are now a common part of the japanese landscape. Though some cafes with male staff exist they are mostly young girls dressed in elaborate themed costumes designed to play to the fantasies of geeks; aristocratic characters with flocks of servants are a common theme in modern Japanese comics.

The focus is not on ‘sexy’ behaviour but on super cute ‘moe‘ girls with focus on hyper submissive ultra feminine characteristics. Over exaggerated girlish hairstyles and high voices are employed by many cosplay waitresses as well as frilly maid costumes or outfits inspired by popular anime and TV characters. 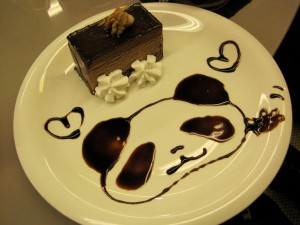 The services offered at a Cosplay Cafe are similar to other cafes in Japan; coffee, cold drinks, desserts and hot meals are served. To play up the kawaii approach often the food will be formed into cute animal characters or stylised animals drawn onto the serving plates.

As well as this ‘extra’ services can be bought such as grooming like manicures, being fed your food, playing games with the employees or buying photographs with the staff. Because the girls make a significant portion of their income taking photos with clientele and due to the age and edgy nature of the employment many Maid Cafe staff will shy away from photos when you see them in public. Collecting photos and trading cards or key rings of the cafe uniforms is not uncommon for regulars.

Some cafes offer additional entertainments such as game shows, concerts and one on one conversation with the maid girls. Some cafes offer drinking games similar to those conducted by geisha. 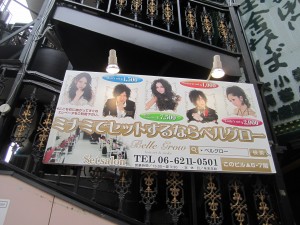 A salon in Namba caters to Kyabakura ultra fashionable hairstyles

Since the 1930s “cafe girls” have been an everyman’s entertainment in Japan – dancing, talking and drinking with anyone willing to pay. Kyabakura literally “cabaret club” are nightclub establishments where paid entertainers follow this tradition. Hosts and hostesses light cigarettes, refresh drinks, engage in flirty conversation and entertain guests with Karaoke, dancing, mixology or other unusual skills.

Payment usually comes in the form of buying the host/ess an expensive drink – companionship and conversation is purchased for a period equivalent to the drink value say 15 – 30 minutes. Drink costs are artificially inflated such as those in a Western strip club and the host will usually receive part of the cost. Some establishments allow the patron to choose their preferred member of staff, others will have floating host/esses who seat themselves at a table full of customers.

Clubs are gender specific though both host and hostess clubs are common and LGBT themed kyabakura are starting to appear on the landscape. Foreigners are often employed by hostess clubs as exotic options and foreigners living or studying in Japan often work in these clubs. Host bars are more aggressive in their selling techniques, often sending fashionable young men into the street to entice women into the club in nightclub districts. The sale of expensive bottles of champagne is often used to part career women with their salary and an extravagant display such as a group cheer or song may be engaged when a bottle is bought – similar to the displays common in Vegas nightclubs when bottle service is purchased.

Hosts and hostesses sometimes engage in paid dates and while sex may be included on these dates that is at the discretion of the employee and their customer – outright prostitution is outlawed and any sexual conduct is considered a personal affair. Paid dates away from the secure club locations can be risky and concerns were heightened after the 1992 murder of an Australian hostess. In 2009 a trade union for Kyabakura was created – similar to the Kemban once created by the geisha. 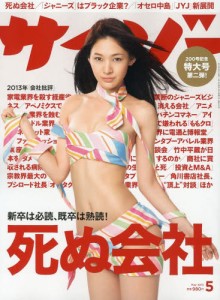 The Japanese have a great love of social order – but not so much when it begins to upset their fun. Consequently when prostitution was outlawed in the 1950s the Japanese began to look for technicalities… and boy what a technicality.

Penetrative sex for money is illegal, but not private contracts for those that happen to be in a brothel and not for those participating in non penetrative sex. Enter the erotic bathhouse, where a patron can get a ‘rub down’ from a willing employee which isn’t intercourse and therefor is legal. Baths and intimate massage are just about everywhere in Japan and they cluster around areas that were historically pleasure quarters such as Yoshiwara in Tokyo. Discrete signs lead to sheltered corridors where nothing but a pricelist can be found. Curious, but I’ve never been in one to tell you more.