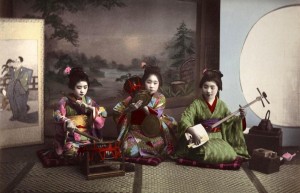 Three geisha play the tsuzumi, taiko and shamisen in this Meiji era postcard

The Pleasure Quarters and the Tayu within were no doubt popular but over time Geisha came to be a formidable rival and would eventually overtake the Yujo (courtesans) in popularity.

There were multiple reasons for this; partially the fashions and elaborate rituals of the first rate Tayu became costly to the point of extremity. Fashions began to trend less towards the elaborate and more towards the chic and simple. Additionally it was forbidden for the Samurai class, tightly controlled in the Edo period to use the services of Courtesans. While there were bound to be times the rules were broken it was easier to comply with the law and find alternative entertainment. Forbidden from offering sexual services the Geisha provided a diversion appropriate to the higher classes and brought an air of sophistication in their performances.

As the 17th century wore on odoriko – trained teenage dancers – were growing in popularity. By the late 18th century numerous performers within the pleasure quarters had become famous artisans – elevating themselves above the prostitution associated with the Tayu. Geisha could offer artistic entertainments – music, singing, dancing as well as social entertainments like story telling, lively conversation, food and drink. All these could be offered at a reasonable price and required only evening wear and perhaps portable items like fans or shamisens. More importantly any teahouse or restaurant could serve as a venue for these entertainments; no expensive brothel licenses or real estate in Yoshiwara.

Geisha began to appear all over Japan, clustered around tea houses, pilgrimage routes and tourist sites along the Tokaido. Teahouses were licenced in Gion in 1665 followed by Pontocho in 1712. The first geiko (person of art) were men, a type of dance performer called Taikomocho.  The first recorded instance of a woman calling herself ‘geisha’ was a performer named Kikuya in 1750 in the Fukigawa region – far from the pleasure districts. Unfortunately the performers in Fukagawa were considered to be illegal courtesans – offering both artistic and sexual services and were relocated to Yoshiwara. 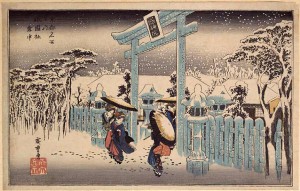 Snowfall at Gion Shrine by Hiroshige 1835

To clarify the definition between Geisha and courtesans, and to ensure fair contribution to the Yoshiwara taxation system a registered licencing system was developed for Geisha. This licencing was overseen by the newly created Kemban – the geisha registration office – an institution that survives today.

Geisha were subject to strict regulations to separate them from the courtesans. They were required to attend parties in groups to avoid unnecessary intimacy and restrictions placed on when they may entertain outside the Pleasure Quarters. Their fashion marked their profession – limits were placed on the intricacy of their dress,  the number of hair ornaments that may be worn and their hair restricted to the uniform shimada hairstyle. Most importantly to mark the separation from prostitution the obi of the geisha was tied in the back rather than the front; undress was not an option. These regulations became so indentured that they continue today.

With the first Kemban created in Yoshiwara in 1779 and Geisha officially recognised as a profession in Kyoto in 1813 the Geisha were well established and here to stay.