War in the Pacific

1926 marked a new Emperor and with it a new era – Showa. With the Meiji restoration having destroyed the idea of feudal loyalism and having established state education and conscription Japan began to experience it’s first flush of nationalism. 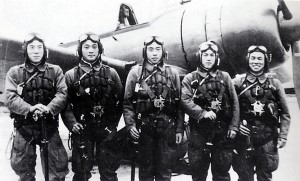 The idea of Japanese superiority and racism became popular and fell easily in line with many of the conservative political views of the time.  After World War I the League of Nations had been formed but national unrest against treaties and a desire to enforce Japanese military might lead to withdrawal from the League. This left Japan politically isolated with few allies and a desire to extend its territories in Korea and China. The Japanese eventually allied with Nazi Germany who shared their view of superior races and military control. Japan signed the Anti-Comintern Pact with Germany desired to suppress Communist rule and support an invasion of China. Despite this ill fated allegiance Japan refused to support the anti-Semitic views of Nazi Germany and would ultimately allow many Jews to emigrate to Japan in 1938. 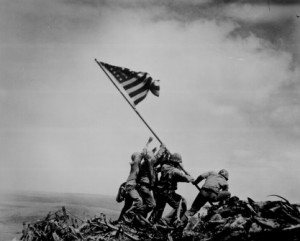 In 1937 the second Sino-Japanese war began and with it a full scale invasion of China with some support from Germany. After the Japanese attack on Pearl Harbour in 1941 this would merge the war into the greater conflict of World War II putting Japan at the front of the War in the Pacific. With the Allied forces now turning their attention to Japan the war would rage throughout Asia and the Pacific for four more years. In 1945 the Americans would famously land in Okinawa and Iwo Jima and ultimately defeat the Japanese after the bombing of Hiroshima and Nakasaki with the secret nuclear bomb projects created by the Americans in the Manhattan Project.

Throughout the War increasing numbers of women left geisha employment to help the war effort. Rationing and war time solemnity made keeping the entertainment districts open impossible. Many women including geisha  were forced to work in factories creating munitions, vehicles, pharmaceuticals and electrical goods for the army. Despite the hardship there was a worse fate – the Comfort Women. 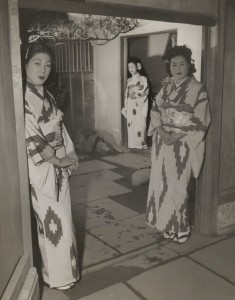 During the war women were forced into sexual slavery by the Imperial Japanese Army and forced to service military personnel in “comfort stations”. Mostly foreigners from Korea, China and the Philippines these women were often tricked into thinking they were getting a legitimate job or were abducted into servitude. Shinto and Buddhism the most common religions in Japan do not forbid prostitution or consider sexual misconduct sinful in the Christian sense. Accordingly prostitution was wide spread in Japan and it was considered a given that women would be available to the military. Hoping to prevent rape crimes by the army the comfort women program was set up by the Empire to provide ready access to women without the need for (further) violent crime.

This approach continued after the American Occupation and initially the Japanese government created an “amusement association” to ensure that a ready population of prostitutes would be available to service the American soldiers. Spurred on by a flush of violent sexual crimes after the invasion of Okinawa the theory was that this policy would prevent the spread of lewd behaviour and foreign children among the greater population. It also ensured that health checks could be performed to limit the spread of sexually transmitted disease.  The intention was to entice women already working in the sex industry into the association willingly but unfortunately forced inclusion continued until 1947 when an Imperial Ordinance began to punish people enticing or forcing women in to prostitution. 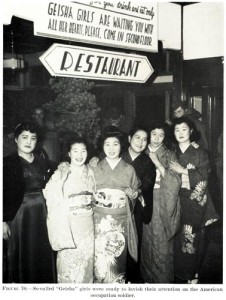 Many prostitutes of the time wore traditional dress and makeup similar to geisha and the Americans unable to differentiate or understand the concept of paid non-sexual companionship assumed that they were the same occupation. All mizu shobai women like dancers, nightclub hostesses and streetwalkers were all lumped together as “geesha-girls”. Consequently this term became became synonymous with prostitution and geisha with it – a misunderstanding that continues for many in the West today. Prostitution would remain legal and relatively common until the 1950s.

Democracy and the modern era

The defeat of the Japanese during the war came as a huge shock to the nation and culturally the country was at an all time low. The economy had been destroyed by the war effort and many of the industrial gains taken in during the Meiji period were lost. Nagasaki and Hiroshima were obliterated and almost an entire generation of men had been killed in the war. 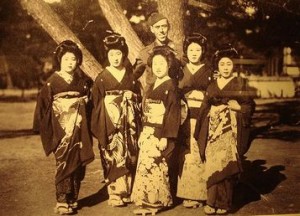 Spurred by the defeat and determined to avoid a future repeat the government and heavily influenced by the Americans Japan underwent another period of social change. The American Occupation ceased in 1949 but sweeping changes overcame the country for long periods after this time. Democratic government was established in 1947 with voting rights given to most citizens including women. Education reform established the modern schooling system with middle and high school education available to the public.

Many traditional forms of authority were disbanded – the Emperor ceased to have authoritative control on the country and became a figurehead. The Zaibatsu – industrial monopolies that had controlled much of the wartime economy were broken up. Land reforms broke up many of the aristocratic baronies and much of the land sold to the tenants that had traditional lived on and farmed the Japanese countryside. 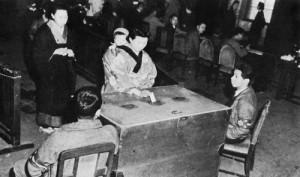 Prostitution was outlawed in 1958 and with it the tradition of mizuage – selling of a geisha’s virginity. Modern human rights laws ensure that no women can be sold into service, geisha are hired willingly and voting and education rights apply as to any other Japanese citizen. Labour laws in Japan now require girls to stay in education until they graduate high school, meaning that many geisha do not begin their career until 18. An exception is made to preserve the maiko tradition in Japan where girls may begin at 16 however controls are put in place to ensure the health and education of these girls continues until the appropriate age. For women today Japan is much like living in any first world country.

Post War Japan focused on rebuilding its economy and the former glory of the Japanese nation. Quality education, sound economic investment and a strong work ethic lead to a miraculous turn around in the state of the country. Particular focus on manufacturing and technological advancement ensured a huge boom period for the Japanese from the end of the American Occupation until the Cold War making Japan one of the strongest economies in the modern world. With it the entertainment industry has flourished and though the traditional geisha now dwindle in numbers – relics of a by gone era – other forms of paid companionship are extremely popular today.