Prior to the start of the 17th century Japan had been in a period of great turmoil and constant war – the Sengoku Period. During this period martial skill and warmongering become extremely important to gaining power and control over the country. Oda Nobunaga and his disciple Toyotomi Hideyoshi were two of these martial lords who rose to power and attempted to unify Japan, end the wars and bring a lasting peace to the country. Both passed away before they able to complete this noble mission but Toyotomi had appointed a group of powerful lords to rule the country when he passed. Though some period of peace under the group passed this was broken when one lord accused Tokugawa of disloyalty, a great offense in Japanese culture. This lead to the the Battle of Sekigahara which Tokugawa won and achieved his ultimate goal – placing himself as the Shogun and new ruler of Japan. It is widely held that this period of unification and subsequent changes in society marks the end of Mediaeval Japan.The period to follow is widely known as the Edo period.

Under the new Shogunate peace flourished – but at a cost. In order to maintain ongoing peace within the country the Shogun defined strict class and societal rules. Each group – the daimyo (lords and landowners), samurai (middle class martial officers), farmers, artisans and traders had rules and regulations they had to follow from the way they dressed to how they could conduct business.The ongoing peace and the establishment of the Shogunate seat of power in Edo (Tokyo) had a large impact on society. Trade was on the rise while taxes remained stagnant leading to a strong merchant class that had not existed in a time of war and landownership. Additionally travel across the country was now possible as never before. The Tokaido became a well travelledroute connecting Kyoto and the seat of the Emperor to Edo and the seat of the Shogun. Economics flourished and people had more time than ever to spend in leisure rather than survival. Consequently there was a huge rise in all kinds of trade – particularly the oldest trade.

As prostitution became more and more widespread throughout Shogunate Japan so too did the sort of crime and chaos that accompanies it. To control crime and restore order the Shogunate established three Pleasure Quarters (yakuko) to contain prostitution and related entertainment. These pleasure quarters were walled and regulated dens of sin; a historical Las Vegas. 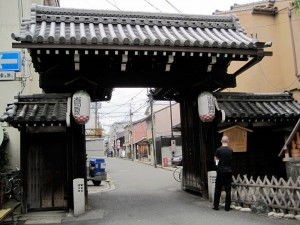 Initially the Kyoto pleasure quarters were founded at Rokujo-Misujimachi however as the quarters became wildly popular the Shogun began to regret their proximity to the city and moved the pleasure quarters to Shimabara which remains intact but unused in Kyoto today. By modern standards this is now quite close to the city centre and has been enveloped by the suburbs of Kyoto however at the time this was far enough removed to be another world.

In Edo the Yoshiwara pleasure quarters were founded at Nihonbashi close to the Tokaido – better to lure in tourists and travellers. As the city grew this was moved to Asakusa North of the city where the culture of pleasure and entertainment continues today. The third licenced pleasure quarter was created in Osaka, south of Kyoto in the Shinmachi district. Shinmachi was destroyed after World War II but it’s modern location would have been close to Nakanoshima.

Inside the pleasure quarters 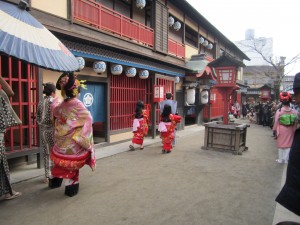 An actressed dressed as a courtesan parades down a film set of Yoshiwara at TOEI Studio Park in Kyoto.

The pleasure quarters themselves were a garden of Earthly delights. Caged off from the rest of the outside world and with strict laws forbidding weapons the Pleasure Districts became a “floating world” of hedonistic pleasure.

While these districts were created to constrain prostitution less carnal entertainments quickly came on offer. Whether to entertain customers while waiting for Courtesans or simply to round out an evening of partying entertainments such as dancing, theatre, music and banquets were available. This caused a steep influx in merchant trade; in particular the Fashion industry became centered around the Pleasure Quarters. Fashionable high end Courtesans would parade down busy streets, their fashions emulated by women across the country.

As with society outside the walls inside the walls the society was carefully graded and divided. Yujo were the women of pleasure, the classes allowed to serve sexual favours. Ordinary prostitutes rose to be Koshi (second level courtesans), Tayu (high level courtesans) and even Oiran (Castle Topplers!). The Tayu were cut off from society, locked into their gilded cage of endless pleasure and this lead to increasingly stifling rituals of clothing, hair and behaviour. The price of high end courtesans went up to meet the costs of these outlandish displays.

So started the rise of the Geisha. Tayu and Oiran were designed to be entertainers but the elaborate costumes, formal speech and the cost of licencing prostitution made them out of reach for many. Geisha on the other hand kept simple costumes, were forbidden from charging for sexual favours and offered services to appeal to the every man – singing, dancing, playing music and serving drinks.

Ukiyo-e Images of the Floating World 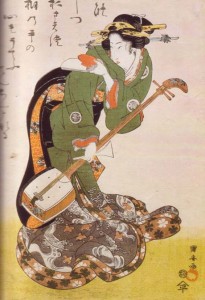 An example of ukiyo-e by Kuniyasu – “Geisha with shamisen”

The heydey of the Pleasure Quarters gave way to a new style of art – Ukiyo-e a form of wood block painting that could easily be reproduced using a printing press. They depicted the so called “floating world” of entertainment, free from the constraints of real life.

Paintings depicted banquet scenes and theatre or focussed on the entertainers themselves. Many Ukiyo-e exist of famous geisha and tayu of the time making Ukiyo-e a kind of celebrity poster that could easily be mass printed and sold to the middle class.

Despite the mass production of the prints these are still masterful works of art and Ukiyo-e was produced by fine artists of the time including Utamaro, Hiroshige and Kunisada.