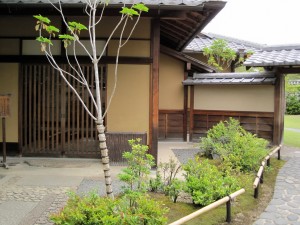 A teahouse in Himeji

Tea ceremony – chanoyu – is a ritualised preparation of tea where mindfulness and harmony are key to the experience. In Japan sado (主義) or “the way of tea” is a cultural tradition with high levels of ceremony. Though originating from Chinese tea rituals sado focuses on Japanese aesthetics and cultural values of respect for the guest.

Sado does not begin and end with the tea ceremony itself but also focusses on learning to arrange each element of the tea house in a manner that respects the aesthete – artwork, flower arranging, interior decorating and more are considered proper preparation of the tea house prior to the ceremony. Fine calligraphy and paper is used in the invitation to guests, beautiful garden architecture is employed to provide a fine vista during the ceremony. Each element is meant to invoke peace and reflect the mindfulness of the preparer to the guest.

There are three main paths of sado in Japan – Urasenke, Omotesenke, and Musha(no)kōjisenke known as the three houses of Sen. All claim descent from 16th century tea master Sen (no) Rikyū (usually known as Rikyū), who is considered the father of tea ceremony.

It takes years to fully master the elements of the tea ceremony. Classes and clubs are common in Japan for students wishing to learn and certification is required to meet different levels of the art. I once had the good fortune to witness a master of sado prepare tea for a travelling sado student at Himeji Koko-en where both parties were versed in the movements. The peace and respect, the deliberate movements once versed are a sight to behold.

Tea ceremony is a methodical, slow and meaningful activity where every hand gesture and movement of the utensils is intentional.

The general steps are as follows:

Further detail on the ritual elements can be found on this Tea Ceremony site.

Some geisha choose to study tea ceremony as part of their arts and those lucky enough to see them perform will note the extremely stylised form of the ceremony that draws off their dance and body training and familiarity with traditional dress.

Some tourist destinations in Kyoto offer a geisha led tea ceremony as a ‘Japanese culture taster’ and geisha can often be seen preparing chanoyu before the geisha dances.  The plate which the wagashi is served on serves as a collector’s souvenir for that year’s dance. 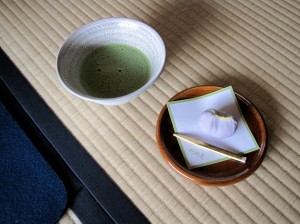 Wagashi are the sweets served before the tea; these originated with plain fruits and nuts but after the introduction of sugar trade in the 14th century these expanded to more elaborate forms of desserts. Common forms of wagashi are formed from anko (white bean paste), anmitsu (jellies) or rice flour into dumplings and cakes such as daifuku, dango or mochi. The form, flavour and colour of the wagashi is designed to reflect both the seasons and the decoration of the teahouse. Wagashi are often beautiful and masterfully created; you can buy boxes of wagashi from bakers around Kyoto that make wonderful visitor gifts (omiyage).

During a formal tea event (cha-obon) a full meal may be prepared instead of just wagashi. The tea meal (cha-kaiseki) is designed like other elements of the tea ceremony to reflect the seasons and may feature raw leaves and flowers currently in season.

Destination Flavour: Japan has probably the best display of tea ceremony and wagashi preparation in their episode on Kyoto. Adam Liaw is an Australian celebrity chef who lived in Japan for many years before becoming a media personality.