Geiko, and their apprentices maiko, are traditional artisans of the Kansai area of Japan. Geiko and maiko are still active in Kyoto on a fairly large scale, and there are at least one yakata (geiko household) still operating in Nara prefecture and Gifu prefecture. These communities operate somewhat traditionally, with the role being seen as a full-time career and an art. The training to become a geiko takes around 5 years.

In other areas of Japan similar roles still exist in the form of geisha and hangyoku (Tokyo), and geigi (Niigata). Women employed as geisha and geigi tend to be doing so part-time, usually of an evening. The training to become a geisha or geigi takes around 2 years.

Geisha are part entertainer part artist and today fill a role as the icons of traditional Japan. They are artisans of music, art and conversation (for more information see the Arts section of this page). Trained from a young age they develop mastery of performing arts during their apprenticeship and career. 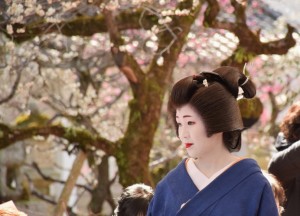 Geisha usually live in an Okiya, a traditional style Japanese house. These are usually run by an elderly woman or mother (okasan) of the house, most often a retired Geisha herself.

Large amounts of time are devoted to learning the arts of the geisha, both throughout apprenticeship and into the professional period. Dance and music classes are grueling with years of practice required for performances. During public dance season there may be large amounts of group practices required with other women from the hanamachi. Other classes may be undertaken such as learning games, learning the local dialect and conversational arts, makeup classes, kimono dressing or tea ceremony. By the time a geisha has graduated she will have spent 5 or 6 years in the study of traditional arts.

The Okiya has a family style hierarchy and is a female run business. Geisha are expected to play “older sister” (onesan) to a young Maiko; this is a bond that will stay for life, and is like having an apprentice to guide and show the ropes, in this way there is a cycle of interest in the community and new comers always have a foot in the door.

The Flower and Willow world is one of the rare areas of Japan where women hold all the power, mostly the men in the Geisha world are dressers, wig makers and other artisans. Most of the businesses particularly the tea houses and Okiya are run and serviced by women, and it is a reverse situation to the rest of Japan where women children are preferred since they can be enveloped into the business.

The teahouses and public performance spaces where Geisha entertain are not owned by the Okiya and usually run by long running families or the local Kaburenjo – the geisha beuracratic arm. Geisha are booked through their Okiya to entertain at an Ochaya (tea house) for a period in an evening. Geisha may attend several such banquets in a night and charge “flower money” for the time they are spending entertaining. This notion is based on the form of time keeping in the past, where Ochaya would burn flower incense sticks for the time a Geisha was working and would charge according to the number of sticks burnt. Geisha also charge for the time spent in other entertainments, flower sighting (during the Sakura cherry blossom season) or even casual meetings.

Traditionally the major income for a Geisha was by taking a Danna or patron. The Danna would then pay for all the daily living expenses of the Geisha, and in turn would attain a more intimate long running affair with the Geisha. Often such relationships resulted in children, sometimes supported by the father and often enveloped into the Geisha world. Today Geisha cannot always find Danna who can support such a lavish lifestyle and often have to continue working at banquets and other Geisha work when they are not with their Danna.

Today it is unusual for geisha to have a relationship with a patron and though wealthy benefactors may support a geisha for their preservation of traditional art this is rarely a personal relationship. Today it is more common for geisha to be autonomous and run their own businesses with public events and tourism playing a greater part in the paid entertainment of the geisha.

Many geiko and maiko these days end up leaving the business to get married and have children. A geiko does not have to leave if she has children, but you cannot be a geiko and be married. If a geiko does not marry and continues her profession, it is possible that she will achieve: 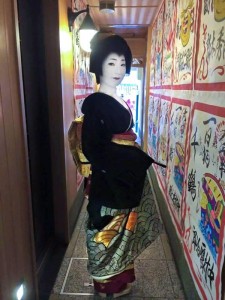 Chizu of Pontocho on her promotion from Maiko to Geisha

In traditional Japanese dress young girls are able to dress more elaborately than older women. Generally when a woman marries they change their hair, clothes and jewellery to reflect their more demure status. In the geisha world this tradition is carried when a girl graduates from being a maiko (apprentice geisha) to being a geiko (a fully trained professional).

Geisha compared to Maiko are less flamboyant. The kimono of the Geisha is usually of a subtle single colour with a design sweeping up from the hem, based on scenes of nature or traditional Japanese themes, in accordance with the seasons. Similarly the obi of the Geisha is more subtle and often a single colour brocade with minimalist obi belts and brooches.

Day to day the hairstyle of the Geisha is a relatively simple bun, however intricate wigs are worn for formal occasions and dance recitals. Similarly for Maiko, the most formal attire of the Geisha is full white makeup with a “5 crest” (kuro tomesode) kimono, which is a black kimono with crests (kamon of the owners family or Okiya) on the front and back of each sleeve and one in the centre of the back below the collar. Geisha wear white collars on their under kimono which is a sign of maturity.

Rather than the tall Okobo of the Maiko, Geisha wear flat lacquered Zohri, with or without Tabi (buttoned socks). The wearing of Zohri and Okobo without Tabi was a fashion started in the hey day of the Geisha world and is considered a very “iki” fashion.

Geisha are expected to be excellent carers and entertainers of men; they should be refined in the art of conversation as well as a more traditional art such as dance or singing, most Kyoto Geisha are adept at the Shamisen (a traditional Japanese 3 stringed instrument similar to a guitar) however this is a talent dying out amongst the Tokyo Geisha.