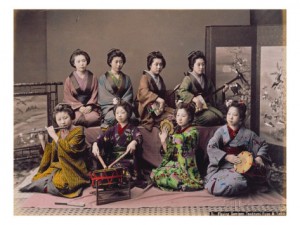 Jikata are musical geisha who are trained in traditional Japanese music. Jikata learn music from very young ages in order to master their craft.

There are several instruments that are common for geisha to learn, the most famous of which is the shamisen (三味線) a three stringed guitar like instrument with a small box drum and a long neck. Played in all minor thirds using a plectrum the shamisen has a haunting melody that evokes strong images of love, loss and seasonal affairs. Geisha are particularly well known for playing kouta or “short songs” usually those developed in the Edo period that focus on shamisen with a vocal accompaniment. Kouta can be played solo or commonly with 2 or 3 musicians and a single singer. Due to the short format of the songs sets of multiple songs are usually played during a performance. While frequently associated with the geisha kouta is actually one of the most popular forms of traditional Japanese music in the modern era. 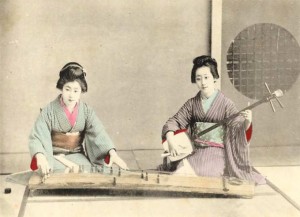 shoulder or ookawa lap drums both played by hand. Large taiko (太鼓) drums or small shime-daiko drums are also used with wooden sticks. The ko-tsuzumi, ookawa and shime-daiko drums are rope tension drums that can be tuned to different sounds while the large taiko drums have nailed skins that are set on a barrel style body. The influence of Noh and Kabuki theatre can be seen in the choice of drums and their rythms.

Less commonly geisha learn the Koto a form of horizontal harp and the Shakahachi or Takabue a type of transverse bamboo flute. Of course jikata also carry an instrument with them – their voice. As well as kouta songs geisha perform longer form vocal pieces during dances and short drinking songs during ozashiki.

You can listen to an entire album of music “Voice of a Geisha Doll” performed by geisha Umekichi for free on YouTube, she released this album to raise money for earth quake victims in Japan.