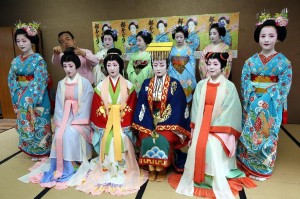 Maiko are apprentice geisha (geiko). They are only found in Kyoto and are often used as the ultimate symbol of Japan. Maiko are a rare breed now, only several at any one time and confined primarily to the Gion and Pontocho districts.

Maiko are easily recognised by their attire. In the Japanese way, as young girls before they become women, the dress of the Maiko is more outlandish than that of the mature Geisha. The Obi and Kimono of a Maiko is brightly coloured and ornately decorated, the Kimono is of the Furisode style (more specifically of the oburisode type kimono) with long flapping sleeves that fall to the floor. The collar of the under-kimono worn by the Maiko is usually of a red and white patterned material, and shows vividly against the white neck of the Maiko.

Maiko move through several stages of maturity as their apprenticeship continues. Numerous highly ritual costume changes are made to identify these passages of time. Maiko have several different hair styles, makeup complexity changes and the pattern of the collar moves from  colourful to demure and white. These changes are physical indicators of the maturity of the girl moving from flighty and girlish to demure and womanly.

A first-year maiko continues to only paint her bottom lip, and she wears long, dangling shidare kanzashi. Her collar is predominantly red with small patches of white embroidery, and her hikizuri kimono usually has a busy pattern. Once she finishes her 1st year of apprenticeship she will begin painting her upper lip, and stop wearing shidare kanzashi. Tomitae of Gion Higashi as junior maiko.

A maiko becomes a senior when her okaasan thinks she has earned it through her dancing and musical accomplishments, usually around the 3rd year of apprenticeship. At this point her eri will be completely embroidered so it is white, and her hairstyle changes to ofuku. Over the next year or two the colour of the tegarafolded cloth in her hairstyle will change to show her seniority. Tomitae of Gion Higashi as senior maiko.

The Obi of a Maiko is longer than any other traditional kimono obi and tied in an ornate style rather than the box knots common in the Obi of both Geisha and other Japanese women. The Obi is tied very high on a Maiko, coming high into the arm pit, with the knot reaching almost to the collar and the ends falling to the floor. Maiko also wear distinctive Okobo, large platformed wooden shoes, which taper to a smaller point on the sole, these are often lacquered and ornate. Okobo usually force a young Maiko to take very small steps, which is considered attractive by Japanese tradition. 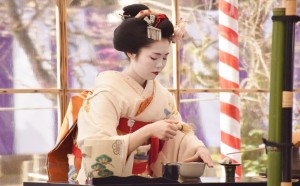 Maiko use their own hair for their elaborate traditional hair styles rather than the wigs that contemporary Geisha wear. Traditionally it is a sign of a productive and hard apprenticeships to have a small bald patch from the ornate hair styles but as apprenticeships grow shorter and wigs more common this is a fading sign of a retired Geisha. The hair ornaments for a Maiko are plentiful and extravagant and are matched to the current season, usually displaying a fall of seasonal flowers constructed from beads.

Two to three months before her erikae (graduation), a maiko will begin tying her obiage and tucking it behind her obi. A month before her erikae she will wear a special hairstyle dependent on which district she is from; In Gion Kobu she would wear yakko shimada, but in Pontocho she could wear any of around 5 different hairstyles. Tomitae of Gion Higashi with yakko shimada

Two weeks before erikae a maiko will wear sakkou hairstyle, with its accompanying outfit and ohaguro (blackened teeth) if she chooses. The outfit worn depends on which kagai she is from:

Erikae, “collar-turning”, is the graduation of apprentice to geiko, professional artisan. At this time the colour of her collar will change to a more demure white as in married women. Her elaborate sakkou hairstyle is undone and the top piece cut off so she can wear her custom-made katsura wig. She dresses in tomesode hikizuri kimono with shorter sleeves indicating her growing maturity.

While beautiful to look at Maiko are still young girls, so the social mastery they are expected to attain as accomplished Geisha is still not fully formed and Maiko are usually expected to dance, and be seen, and though performing tasks such as filling drinks they are not intended to entertain guests to the same degree as a Geisha. Young girls may become Maiko at 16, under current Japanese law, as all adolescents must attend high school to this age. A Maiko’s apprenticeship is usually 5 years, and so at 21 she may become a fully fledged Geisha.

Though not attending conventional school after becoming Maiko, they must nonetheless attend classes every morning in dance, Shamisen, singing and other art. Maiko as well as learning artistic pursuits must learn the social graces and old style Kyoto dialect before becoming a Geisha.

As such an identifiable icon of Japanese traditional culture the Maiko are often in demand, especially for photography. A popular tourist activity in Kyoto is to catch a photograph of a Maiko hurrying to an appointment.