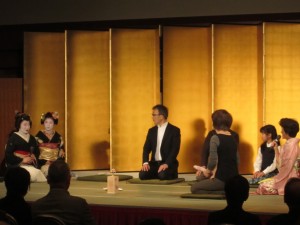 Ozashiki are geisha gatherings, today they are mostly very formal affairs featuring a traditional banquet followed by performances but once they were every day dining and drinking affairs for members of society in Japan. Geisha entertainments are wild and varying but mostly focus on entertaining and flattering the honoured guests, with a fair amount of drinking and silliness.

Geisha are trained in the art of conversation, that is how to engage the diner and keep them entertained or informed. Historically there have been many famous geisha famous for their views on art or politics who were able to entertain intellectual groups for an entire evening. A traditional Japanese form of entertainment is also to construct poems, moon viewing or hanami parties may feature geisha who are prolific writers. Today many geisha focus on flattery and a way to connect with any diner as ozashiki frequently feature honoured guests and tourists rather than regular patrons. Geiko in Kyoto are taught to speak in Kyoto-ben an antiquated dialect with lilting soft tones which is considered charming and unique in Japan.

Party games feature regularly in the armory of entertainment for any geisha or maiko. They are often simple childlike games played with props that are found in a traditional banquet room like screens, fans or sake boxes. Losers of the game may be required to drink or to do something embarrassing – rather like truth or dare in Western tradition. As drinks flow the games get harder and of course the punishments more common!

A screen is employed and two players must hide behind each side of the screen. A song is sung, at the end of the song each player must creep out from behind the screen while assuming one of three roles – Samurai (Watonai), Old Woman or Tiger. This makes the game a very elaborate form of rock paper scissors; old woman beats the samurai with her cane, but loses to the tiger that eats her, the samurai cuts down the tiger with his sword.

“Everyone please look at the bamboo grove which extends thousands of miles.
You can see Watonai with a gold headband and a cord catching a tiger.
Tora, tora, tora(tiger, tiger, tiger)”

An empty sake box is placed upside down between two players and the geisha sings a song. As the song progresses each player must tap or lift the box in turn, if the box is lifted they must tap their closed fist on the empty table. The key to the game is to get the other player distracted so that they tap the table with an open hand instead of with a closed fist. The music gets faster as the game progresses and often the loser must drink a measure from the sake box.

Here a small target is set up and players use the geisha’s fan as a missile trying to knock the target off a stand. The unusual shape of the fan makes this much harder than it sounds. Additional points are awarded for complicated throws and clean hits. The game can be made harder by moving players further from the target. The below video is from a tosenkyo tournament and features professional players.