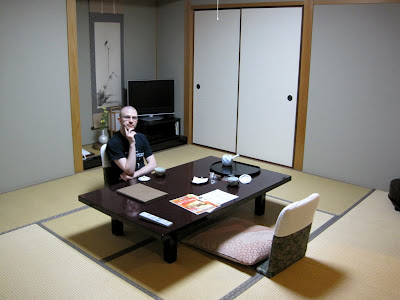 Guest rooms are usually furnished in the traditional style with a tatami room that functions as a living/dining room and bedroom. Ryokan staff will generally change out the bedding while you eat breakfast for a floor level table and seats. Generally baths are of the traditional family style – large shared pool sized baths not attached to the guest room and requiring a timed alotment by the Mistress of the house. Many modern ryokan will have private toilets and sometimes bathrooms attached to the guest room but this is not standard and you should check on the layout of your ryokan before booking accomodation. Additionally most ryokan do not have a restaurant and will generally order food from a local eatery to be served at breakfast (and dinner on request).

This leads to some unique and charming behaviour that I find charming but may deter some travellers. Many ryokan will allocate you a parlour maid that may change out your bedding and furniture and serve you meals and the timing may seem a little strict to some people. Usually rooms are charged per head rather than per room, this can make some ryokan stays exceptionally well priced and others seem steep depending on the size of your party and your room. I have found that travelling as a lone female with a group of men I have tended to be given a large elegant room to myself by the host. 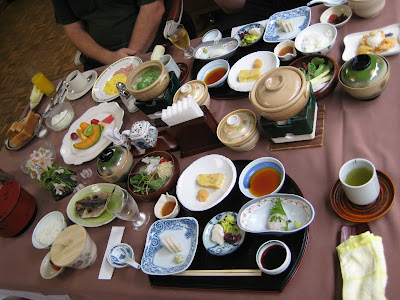 The expectation is that ryokan act as a bed and breakfast and so they expect you to rise for an early meal, this will generally be the time they change your linen and put away your futon. Many ryokan have curfews where they lock the outside doors, though many will also offer an after hours service. Also they will generally clean your room while you are out sight seeing during the day. This means if you aren’t home soon after dinner, intend to sleep in or wish to stay in your room during the day you should tell the staff. Usually ryokan managers are gracious and accommodating and will make arrangements for this (such as if you intend to have a rowdy night out, or are ill and wish to sleep in) but they can become irritated if you alter their regimented schedule without due warning.

Particularly if you are in an onsen ryokan I would advise booking a dinner with at least one night of a stay in such an establishment. Many coursed elegant and seasonal kaiseki cuisine served to you in your own private tatami room is an exquisite luxury that is very affordable in many ryokan. For extra fun most ryokan will offer you yukata – light cotton Summer kimonos for wear around the inn particularly after bathing. A long hot bath and a beautiful Japanese dinner in customised hotel kimono is a treat unique for your holiday in Japan!

Like bed and breakfasts in the West Ryokan are as variable as you want them to be from budget no frills (no food, no private bath!) to sumptuous elegant mansions tittering with staff and dripping in history. I like to choose ryokan with a bit of quirk – a mad hostess who presses stories, sweets and cats on you is exactly what I’m after but you may be different. Read reviews and decide for yourself. 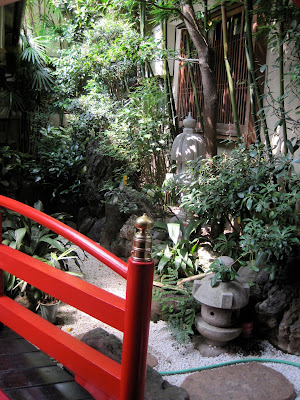 Things to remember and enquire about before booking

I heavily use the Japanese Guest Houses service and I think they’re great but they don’t have the cheapest options if you want something truly budget you may wish to shop around. They’re great for booking onsen ryokan and a guide to onsen towns also.