Onsen are Japanese natural hot spring baths, going on holiday to an onsen town to bathe and relax is a very traditional Japanese past time. Consequently Onsen towns carry a range of traditional entertainments such as bathing, banqueting or karaoke. Banquets can be accompanied by night time entertainers such as geisha at some onsen towns. 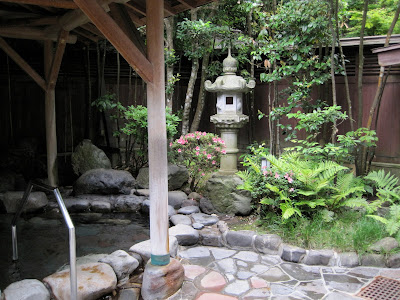 Onsen geisha traditionally are transient members of the geisha community. Entry into a geisha house in these towns is generally not strict as in Kyoto or Tokyo and at a time when geisha were rife onsen geisha could move from one onsen town to another throughout the season to perform. This in turn lead to a reputation of unsavoury girls who leave their past behind them whether this is true or not is rather subjective. What is true is that the kind of carousing and nudity welcome at onsen towns also attracts a more lewd sense of humour and entertainment.

They may be a little sneered at within the community for being a little tawdry and a lot less devoted to their arts but onsen geisha are accordingly a lot more affordable and a lot more accessible by your average Gaijin. Due to increased tourism in Japan onsen geisha generally perform to a large dinner theatre or tour group rather than small intimate banquets.

The Hakone Geisha Association can order a geisha to your room for entertainment during your kaiseki dinner at a cost of around 14000 Yen for the evening, with additional increments that can be purchased in 30 minute slots. Have your ryokan manager ring  at least the day before on 0460-85-5338

The Atami Geisha perform weekly dances of the Yumemachi-odori Hananomai for the public on Saturdays and Sundays at 11:30, are only 1300 Yen. The Kenban also offers traditional Japanese dance lessons at a cost of 50 000 Yen a day including kimono rental have your ryokan manager ring 0557-81-3575.

To highlight the differing standards of onsen geisha the Atami geisha are also looking for new recruits! Interested parties should apply on their website.

Whether you are a geisha enthusiast or not an onsen holiday is one of the most unique, relaxing and memorable vacations you can ever have. I have remarked in the past that if I were to only have one vacation for the rest of my life it would be an onsen stay.

Lavish kaiseki served in your room, local delicacies, traditional inns and a chance to just relax in a soothing hot mineral bath does wonders for the body and the soul. More than this many wealthy Japanese have retired to onsen towns and so tourist gems can be found littered throughout these quiet hideaways. Many onsen towns have limited mobile internet and their traditional ways force the workaholic to step away from the constant rush of modern life and just relax in the peace and quiet.

Some recommended onsen towns are: